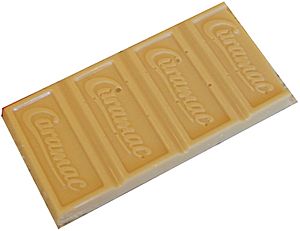 Caramac bar without the wrapper

Caramac is the brand name for a caramel-flavoured confectionery that was created by Mackintosh's, and is now manufactured by Nestlé. It was first introduced in the United Kingdom in 1959. The name is derived from the syllabic abbreviation of Caramel and Mackintosh.

A similar confection is used in the covering of McVitie's Gold biscuit bar. A limited edition Caramac Kit Kat bar was released in the United Kingdom in 2005 and due to popular demand it was brought back in 2007.

In 2015 a buttons version was launched.

The name of the product was determined in a competition. The competition was held in what was the Norwich factory of Mackintosh's, and won by Barbara Herne. The bar was made at the old Norwich factory until its closure in 1996, when production transferred to Fawdon on Tyneside, where it is still made.

The bar is a light brown colour and is manufactured using sweetened condensed milk, butter, various flavourings, and sugar. It is packaged in an orange-red and yellow wrapper.

All content from Kiddle encyclopedia articles (including the article images and facts) can be freely used under Attribution-ShareAlike license, unless stated otherwise. Cite this article:
Caramac Facts for Kids. Kiddle Encyclopedia.