Carbondale City Hall and Courthouse, also known as the Carbondale Municipal Building, is a historic city hall and courthouse building located at Carbondale, Lackawanna County, Pennsylvania. It was built in 1892-1894, and is a brick and bluestone building in the Romanesque-style. It consists of five-story, square, corner tower; three-story wing; and two-story brick wing. The three-story wing, along with the tower, houses the Carbondale City Hall. It features a massive, half-circle primary entrance and rusticated stone and brick turrets. The two-story wing was built in 1859 as the courthouse, and incorporated into the new building. 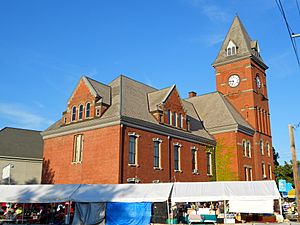 View of the rear of the building, showing the two-story wing

It was added to the National Register of Historic Places in 1983.

All content from Kiddle encyclopedia articles (including the article images and facts) can be freely used under Attribution-ShareAlike license, unless stated otherwise. Cite this article:
Carbondale City Hall and Courthouse Facts for Kids. Kiddle Encyclopedia.