Cardiff International Sports Village (Welsh: Pentref Chwaraeon Rhyngwladol Caerdydd) is located in Cardiff Bay in the city of Cardiff, Wales. It is one of the largest regeneration projects currently in the UK and is a public-private funded project.

The site currently has a 50-metre (164 ft) Olympic standard swimming pool, an ice rink and a white water canoeing and kayaking centre.

Upon completion, an indoor snow centre with real snow for skiing and snowboarding, and a hotel were also planned. Other proposals included a 220-metre (722 ft) observation tower and a super-casino, although both these schemes are unlikely to ever be realised. The sporting facilities were used as a training venue for the London 2012 Olympics along with the Millennium Stadium, which hosted some of the football.

In 2019, Cardiff Council approved a new ten year masterplan for the International Sports Village site with plans for around 1,000 new apartments, bars, restaurants and leisure facilities. 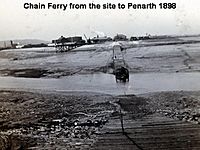 In the early part of the 19th century Welsh coal was in much demand throughout the world. Cardiff was the centre of this export trade, but it was under the control of the Bute family. In 1859, the Taff Vale Railway Company created a series of wharves in the mouth of the river Ely. By 1898 the site had a chain ferry (right) which gave Ferry Road its name. A subway was also created for dockers to travel to the site.

The Railway public house, named because of the criss cross of tracks over the site became known as the Red House. This well known inn was used as a beacon to navigate sea going craft until its recent demolition.

When the barrage was completed, the site became prime real estate again with a freshwater lake on the shore. This would eventually become the Cardiff International Sports Village.

All content from Kiddle encyclopedia articles (including the article images and facts) can be freely used under Attribution-ShareAlike license, unless stated otherwise. Cite this article:
Cardiff International Sports Village Facts for Kids. Kiddle Encyclopedia.