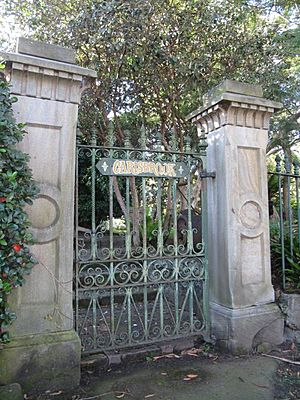 A single-storey, sandstone house, built in 1884. Set in fine gardens with landscaped terraces down to the River. Has bay window and corner verandah, bearing bellcast iron roof, supported on cast iron columns with lace brackets. Main hipped roof is of slate. Windows and French doors have shutters which are not original. There is an attractive rear courtyard, walled with sandstone in the 1960s, and with its original well. The verandahs feature tessellated tiles - probably Minton pattern (bought from the Sydney Arcade which was being demolished in the 1960s).

As at 13 April 2000, the condition of the property was good. Its physical fabric is intact and largely original. Planned authentic restoration of its interior finishes and furnishings, based on a study, will enhance its integrity. 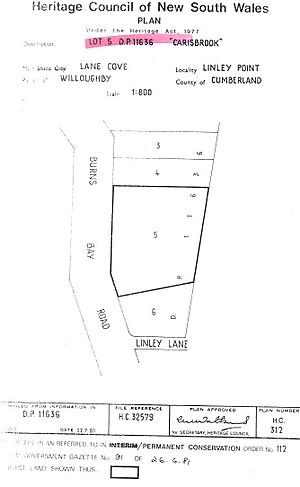 As at 3 July 2012, Carisbrook, constructed in 1884 was a visually attractive and intact example of Victorian architecture, preserving many original features and furnished for public visitation as a period house museum. It is set in beautiful landscaped gardens stretching down to Burns Bay. (Heritage Branch files)

Carisbrook was listed on the New South Wales State Heritage Register on 2 April 1999 having satisfied the following criteria.

It is the earliest remaining house in the Linley Point area, being built in 1884.

It is representative of the impact of transport on subdivision and development, being built, and the land south of it being subdivided, just as the Fig Tree Bridge is being constructed nearby.

It is set in a beautifully landscaped garden stretching down to Burns Bay. Constructed of sandstone, it is visually and architecturally very worthwhile, and preserves the majority of its original features.

As a house museum it reflects changes in social life and household technology since 1884.

Hosting many community functions, and visits from individuals and groups of all ages, and serving as Lane Cove's only historical museum, open regularly to the public, it is an important focus of community life.

It is the oldest surviving home on Linley Point, and we have been informed is the only Victorian house museum in Sydney, open to the public.

All content from Kiddle encyclopedia articles (including the article images and facts) can be freely used under Attribution-ShareAlike license, unless stated otherwise. Cite this article:
Carisbrook, Lane Cove Facts for Kids. Kiddle Encyclopedia.