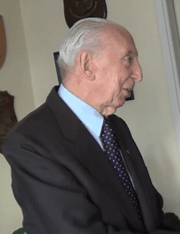 Carlos Alberto César Büsser (January 10, 1928 – September 29, 2012) was the commander of the Argentine Forces during Operation Rosario, that took the Falkland Islands in 1982, and forced the surrender of its Governor.

All content from Kiddle encyclopedia articles (including the article images and facts) can be freely used under Attribution-ShareAlike license, unless stated otherwise. Cite this article:
Carlos Büsser Facts for Kids. Kiddle Encyclopedia.