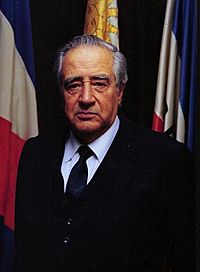 Carlos Julio Pereyra Pereyra (5 November 1922 – 9 February 2020) was a Uruguayan schoolteacher, author and politician. He was born in Rocha. He was a member of the National Party. He served as a senator from 1966 to 2005. In the 1971 election, he was the running mate of Wilson Ferreira Aldunate. He was an underground leader of his party during the civic-military dictatorship. He ran for president in the 1989 and 1994 elections.

Pereyra died of kidney failure in Montevideo on 9 February 2020. He was 97.

All content from Kiddle encyclopedia articles (including the article images and facts) can be freely used under Attribution-ShareAlike license, unless stated otherwise. Cite this article:
Carlos Julio Pereyra Facts for Kids. Kiddle Encyclopedia.