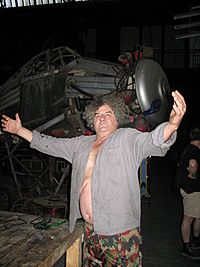 Carlos Regazzoni (1 December 1943 – 26 April 2020) was an Argentine sculptor. Regazzoni was born in Comodoro Rivadavia, Chubut Province. He worked in Paris during the 1990s. He was invited to exhibit at the Cent ans de l'aéronautique française. Regazzoni returned to Argentina and founded a workshop in Buenos Aires. His works were often described as Dantesque and were compared to Salvador Dali.

All content from Kiddle encyclopedia articles (including the article images and facts) can be freely used under Attribution-ShareAlike license, unless stated otherwise. Cite this article:
Carlos Regazzoni Facts for Kids. Kiddle Encyclopedia.