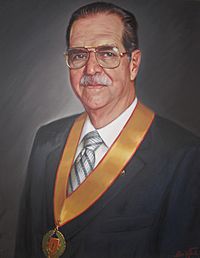 Carlos Alberto Vidal Layseca (4 February 1931 – 24 September 2017) was a Peruvian physician and politician. He was born in Lima, Peru. Layseca served as Minister of Health from July 1990 through February 1991 under the Alberto Fujimori administration. He later served as Rector of Cayetano Heredia University from 1994 through 1999.

All content from Kiddle encyclopedia articles (including the article images and facts) can be freely used under Attribution-ShareAlike license, unless stated otherwise. Cite this article:
Carlos Vidal Layseca Facts for Kids. Kiddle Encyclopedia.