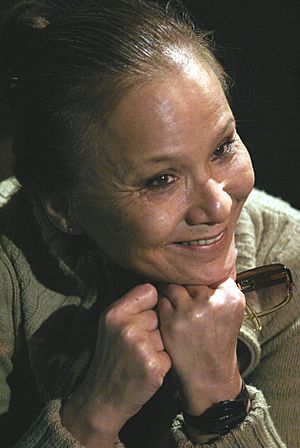 Sanae "Carlotta" Ikeda (Japanese: カルロッタ池田; 19 February 1941 – 24 September 2014) was a Japanese butoh dancer. She started her career in the early 1960s. She first became a member of the butoh group Dairakudakan in the early 1970s. She founded the Ariadone Company, an all-female butoh dance troupe, with Kô Murobushi in 1974.

Ikeda was born in Fukui, Fukui Prefecture. At the age of 19, she graduated from a dance school in Tokyo. Her stage name was in honour of Italian ballet dancer Carlotta Grisi. In the 1980s, she moved to Paris, France.

All content from Kiddle encyclopedia articles (including the article images and facts) can be freely used under Attribution-ShareAlike license, unless stated otherwise. Cite this article:
Carlotta Ikeda Facts for Kids. Kiddle Encyclopedia.