Carlungie and Ardestie Earthhouses can be found in farmland north of Monifieth and Carnoustie. They date to the late Iron Age, from the 1st to 2nd centuries AD. They are examples of souterrains, probably used to store food. 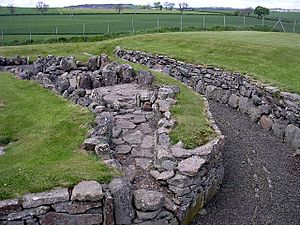 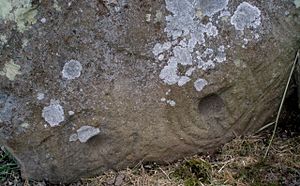 Cup and ring marks at Ardestie

Ardestie earthhouse was discovered in the 1940s to the north of Mains of Ardestie farm. It was excavated in 1949-1950 by F.T. Wainwright, who first suggested that the function of the souterrain was as an underground cow byre, although grain storage and ritual use have also been suggested. Incorporated into the structure are recycled stones with neolithic/Bronze Age cup and ring marks 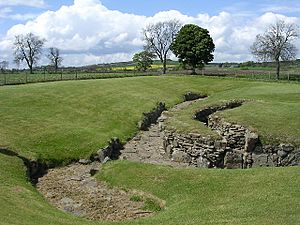 Carlungie earthhouse was excavated in 1950-1951, also by Wainwright. It is of similar date and a similar interpretation of its utilisation was made.

All content from Kiddle encyclopedia articles (including the article images and facts) can be freely used under Attribution-ShareAlike license, unless stated otherwise. Cite this article:
Carlungie and Ardestie earthhouses Facts for Kids. Kiddle Encyclopedia.