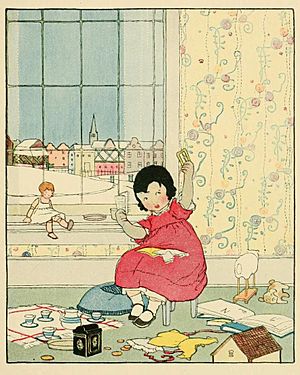 Browne was born on March 29, 1895 in Calumet, Michigan. She attended the Chicago Art Institute and the Art Students League of New York.

Browne created illustrations for books and greeting cards for the P. F. Volland Company. Her illustrations were described as "light and dainty", "difficult to surpass in sheer loveliness", "apt pictures .. to please the wee ones", "assisting the text admirably, designed as they are to delight the child's heart," and as making "appropriate" gift books for "little friends and relatives. She also designed wallpaper patterns for children, and invented an educational doll apparatus, "to associate with a doll educational matter which is commonly presented in unattractive, formal lessons." Her lithographs, some of which were shown at the Ninth International Print Makers' Exhibition in 1928, were described as "amusing and very expert".

All content from Kiddle encyclopedia articles (including the article images and facts) can be freely used under Attribution-ShareAlike license, unless stated otherwise. Cite this article:
Carmen L. Browne Facts for Kids. Kiddle Encyclopedia.