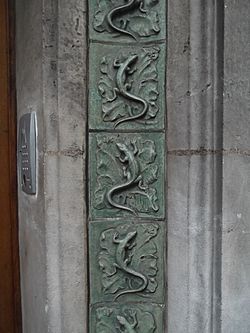 Carrier's constraint is an observation about air-breathing vertebrates which flex their bodies sideways when moving. They find it very difficult to move and breathe at the same time. The sideways flexing expands one lung and compresses the other, shunting stale air from lung to lung instead of expelling it completely to make room for fresh air.

It was named, by English paleontologist Richard Cowen, after David R. Carrier, who wrote his observations on the problem in 1987.

Many amphibia and reptiles can and do move very fast over short distances. They do it by moving without breathing, which builds up an "oxygen debt". Humans sometimes do this when running very quickly. 100-metre sprinters do not breathe during a race. They collapse and recover afterwards. Many reptiles and amphibians are ambush predators, which fits that kind of life quite well. There is no reptile or amphibian equivalent to dogs or deer, with their huge capacity for running long distances.

There are, however, some reptiles which get round the Carrier constraint. Snakes, for example have only one lung. And, of course, dinosaurs were bipedal to start with, and most groups stayed bipedal to the end. Lizards run in short bursts with brief pauses. Carrier was able to show that they breathed in the pauses.

All content from Kiddle encyclopedia articles (including the article images and facts) can be freely used under Attribution-ShareAlike license, unless stated otherwise. Cite this article:
Carrier's constraint Facts for Kids. Kiddle Encyclopedia.