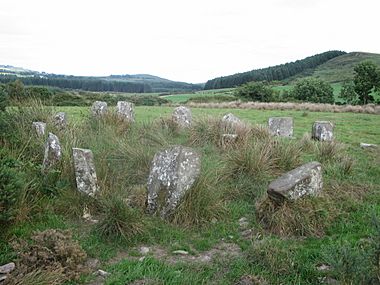 It consists of two axial stone circle, two stone rows, and an ogham stone which has been moved around a half mile away. The main site is an axial stone circle, 8.2m in diameter, comprising 16 stones, with one misplaced. Their height varies from 30 cm to 90 cm. The long, straight-edged axial stone is not the lowest, and the highest is next to the lower of the two portal stones. A boulder is situated in the center of the circle. About 250m north, near the River Laney, is another stone circle: of five stones in a D-shape, with an axial stone with a naturally bevelled upper surface.

Carrigagulla A is a 7.8m diameter stone circle comprising 15 standing stones circling a central slab. It is thought that there originally may have been 17 stones in place. The Carrigagulla NE stone row comprising five stones, four of which have been moved and are now used as gates. W 371 829. The stone row at Carrigagulla SW is built from three stones, one of which has fallen.

Carrigagulla Ogham Stone was discovered by Coillte Teoranta during peat cutting, but the exact location of the find is not known. It has been housed in Cork Public Museum since 1940.

All content from Kiddle encyclopedia articles (including the article images and facts) can be freely used under Attribution-ShareAlike license, unless stated otherwise. Cite this article:
Carrigagulla Facts for Kids. Kiddle Encyclopedia.