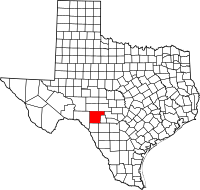 Carta Valley is a small unincorporated community in southwestern Edwards County, Texas, United States, in the western part of the state.

The town is named after Ed Carta, an early settler. The town became populated in 1898. A post office was established in 1907, a year after W.A. Varga opened a store and became the postmaster. Some time before 1913, a local school was opened.

The height of the town’s population was in the 1960s when the population reached an estimated 150. At that time, there were five businesses. The town currently has a population of 12. (2000).

All content from Kiddle encyclopedia articles (including the article images and facts) can be freely used under Attribution-ShareAlike license, unless stated otherwise. Cite this article:
Carta Valley, Texas Facts for Kids. Kiddle Encyclopedia.