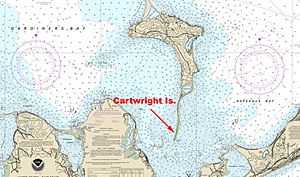 Cartwright Island lies just off the tip of a long narrow sandspit that extends from the south end of historic Gardiners Island, off the coast of Long Island, New York. Like the sandspit, Cartwright Island is low and formed of sand, and unsuitable for habitation.

The Island is a navigational hazard.

The Goelet family, the wealthy owner, who owned Gardiners Island since the 17th Century, assert the sand spit and Cartwright Island are part of their property. In 2018 Roderic Richardson challenged the Goelet's assertion of ownership after their security guards confronted Richardson, and members of his family, on th Cartwright Island.

The Goelets assert their original 17th Century deed grants them everywhere "an Ox can wade without getting its belly wet." Richardson's court challenge triggered a discovery process, so the courts could decide where the property boundary was under modern law.

The East Hampton Trustees published a 13 page review of the scope of the 17th century deed by a local historian. The report stated that the family had exercised careful due diligence to protect its property rights.

In September 1971 Otis G. Pike put forward a bill that the US Federal government expropriate Gardiners Island, Cartwright Island, Gardiners Point Island, Hicks Island, and 1000 acres of the nearby shore of Long Island, and turn them into a national monument.

In September 1973 David P. Rumbough disappeared during a boating accident off Cartwright Island. His friend Jonathan Kieth survived the crash of his 27 foot speedboat. Rumbough was the son of actress Dina Merrill.

All content from Kiddle encyclopedia articles (including the article images and facts) can be freely used under Attribution-ShareAlike license, unless stated otherwise. Cite this article:
Cartwright Island Facts for Kids. Kiddle Encyclopedia.