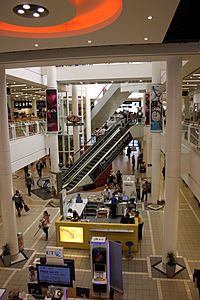 The centre was built by John Laing on the site of the former Grand Central Hotel. The prestigious nature of the development made it a target for the Provisional IRA: the centre was bombed five times during its construction, four times after it opened, and suffered incendiary bomb attacks. It is now the third largest shopping complex in Northern Ireland after the construction of the new Victoria Square shopping centre; which is also located in Belfast and Foyleside, Derry.

All content from Kiddle encyclopedia articles (including the article images and facts) can be freely used under Attribution-ShareAlike license, unless stated otherwise. Cite this article:
CastleCourt Facts for Kids. Kiddle Encyclopedia.