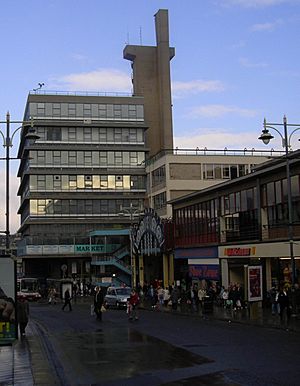 Castle Market from the south west.

The oldest part of the building was the Fish and Vegetable Market, constructed in the inter-war period. The remainder of the building was constructed by J. Stuart Mackie and Andrew Derbyshire under the auspices of J. L. Womersley between 1960 and 1965. It had two main floors, both of which included small shops and stalls, and each accessible from street level.

Other stores faced on to the surrounding streets, while a gallery found a storey above the main part of the market contained several more shops, and access to an office building surmounting the structure. The gallery was linked by bridges across Exchange Street to further above-ground shopping areas.

All content from Kiddle encyclopedia articles (including the article images and facts) can be freely used under Attribution-ShareAlike license, unless stated otherwise. Cite this article:
Castle Market Facts for Kids. Kiddle Encyclopedia.