Casuarina cunninghamiana, commonly known as river oak or river she-oak, is a she-oak species of the genus Casuarina. The native range in Australia extends from Daly River in the Northern Territory, north and east in Queensland and eastern New South Wales. 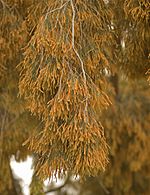 The River Oak is an evergreen tree with fine greyish green needle-like foliage that grows to a height of 10–35 m (33–115 ft) with a spread of about 10 metres (33 ft). The trunk is usually erect, with dense rough bark. Flowers are reddish-brown in the male and red in the female. Cones are small, nearly round to elongated and about 10 millimetres (0.39 in) across.

Trees are usually found in sunny locations along stream banks and swampy areas. It's widely recognised as an important tree for stabilising riverbanks and for soil erosion prevention accepting wet and dry soils. The foliage is quite palatable to stock. C. cunninghamiana is frost tolerant down to around −8 °C (18 °F) and is widely used effectively as a screening plant. It is useful on windy sites and is also suited to coastal areas. C. cunninghamiana has been introduced into several other countries for the purpose of agroforestry.

The species has many common names including River Oak, River She-oak or Creek Oak.

Casuarina cunninghamiana is an invasive species in the Everglades in Florida and in South Africa.

All content from Kiddle encyclopedia articles (including the article images and facts) can be freely used under Attribution-ShareAlike license, unless stated otherwise. Cite this article:
Casuarina cunninghamiana Facts for Kids. Kiddle Encyclopedia.