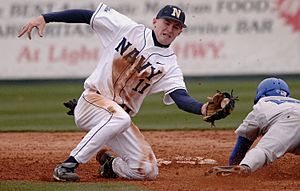 A baseball player making a catch

In baseball, a catch occurs when a fielder gains secure possession of a batted ball in flight, and maintains possession until he voluntarily or intentionally releases the ball. When a catch occurs, the batter is out, and runners, once they properly tag up (retouch their time-of-pitch base), may attempt to advance at risk of being tagged out.

Unlike in American football and other sports, neither secure possession for a time nor for a number of steps is enough to demonstrate that a catch has occurred. A fielder may, for example, appear to catch and hold a batted ball securely, take a few more steps, collide with a wall or another player, and drop the ball. This is not a catch.

Umpires signal a catch with the out signal: a fist raised into the air, often with a hammering motion; if there is doubt about it, the umpire will likely shout "That's a catch!" On a close no-catch, the umpire will signal with the safe signal, which is both arms swept to the side and extended, accompanied by the call "No catch, no catch!" with an emphasis on the word "no".

The fielder must catch the ball with his hand or glove. If the fielder uses his cap, protector, pocket or any other part of his uniform in getting possession, it is not a catch. Therefore, a foul ball which directly becomes lodged in the equipment of the catcher (other than his or her glove) is not considered a catch and hence not a foul tip.

It is not a catch if the batted ball hits a fielder, then hits a member of the offensive team or an umpire, and then is caught by another defensive player.

A catch is legal if the ball is finally held by any fielder before it touches the ground. Runners may leave their bases the instant the first fielder touches the ball. A fielder may reach over a fence, a railing, a rope, or a line of demarcation to make a catch. He may jump on top of a railing or a canvas that may be in foul ground. Interference should not be called in cases where a spectator comes into contact with a fielder and a catch is not made if the fielder reaches over a fence, a railing, a rope. The fielder does so at his or her own risk.

If a fielder, attempting a catch at the edge of the dugout, is "held up" and kept from an apparent fall by a player or players of either team and the catch is made, it shall be allowed.

To avoid ambiguity with the common term catch meaning any action that gains possession of a ball, some may say that a fielder gloved a thrown ball or a batted, bouncing ball.

All content from Kiddle encyclopedia articles (including the article images and facts) can be freely used under Attribution-ShareAlike license, unless stated otherwise. Cite this article:
Catch (baseball) Facts for Kids. Kiddle Encyclopedia.