Cathedral of the Transfiguration (Markham, Ontario) facts for kids 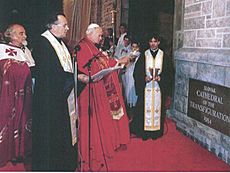 The cathedral is on land once part of Romandale Farms Inc., founded by the late Stephen B. Roman, a leading breeder and exhibitor of Holstein cows and the founder of Denison Mines Limited, a mining company. Mr. Roman, who arrived in Canada in 1937 from his native Slovakia, donated the land for the cathedral, which "he built as a beacon of religious freedom" for his fellow Slavs then living under Soviet oppression. Mr. Roman modelled the cathedral on the church in Veľký Ruskov (now Nový Ruskov), the Slovak village he was raised in.

Construction of the cathedral began in early 1984, and the cornerstone and altar stone were blessed by Pope John Paul II during his visit to Canada in September 1984, marking the first time that a Roman Pontiff consecrated a church in North America. The cathedral, which is owned and administered by the Slovak Greek Catholic Church Foundation, was built to serve Slovak Catholics throughout the Greater Toronto Area (GTA), and until 2006, it was the seat of the Slovak Catholic Eparchy of Saints Cyril and Methodius.

Mr. Roman died in 1988 and did not see the cathedral completed. His funeral service was held in the partially completed structure, with 1,600 people in attendance.

Václav Havel, the first president of a democratic Czechoslovakia, following the fall of the Communist regime, visited the cathedral in 1990.

The exterior of the cathedral was used in the 1995 movie In the Mouth of Madness, where it portrayed the Black Church located in Hobb's End. It can also be seen on some of the posters promoting the film. It was also featured in the 2013 Canadian independent film "Rearview" written and directed by Robert Gulassarian.

Following a dispute with the Slovak Greek Catholic Church Foundation, the Slovak Catholic Eparchy of Saints Cyril moved its seat to a church in Toronto. From 2006 to 2016, the cathedral was closed to the public while extensive interior work was carried out. Although work still remained to be done on the interior, in November 2016, the City of Markham issued a temporary occupancy permit to allow Jesus the King Melkite Greek Catholic Church to use the cathedral as a place of worship. 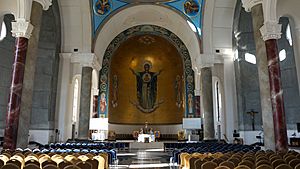 The cathedral has three gilded towers, representing the Trinity. The centre tower, named the Tower of the Transfiguration, rises 64 m (210 feet). It contains one of the world's largest peals of three bells, weighing 14,500 kg (32,000 pounds). The bells were cast in bronze at the Fonderie Paccard in the French town of Annecy and hung in the cathedral in 1986. Each of the cathedral's side towers is 45 m (148 feet) tall. 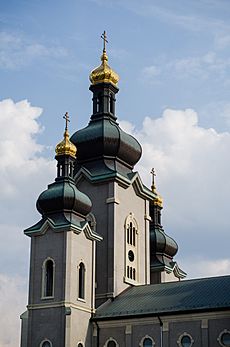 The building features three gilded towers, which represent the Trinity.

The cathedral contains an 25-metre-wide (82-foot) mosaic of Christ Pantocrator, which occupies the entire dome of the cathedral, and a mosaic of the Virgin Mary, which covers the curved wall of the apse. In 2017, mosaics were installed in the circle under the dome and in the pendentives, which connect the dome to its four supporting pillars. While reflecting biblical themes, the content of the mosaics differs from traditional renderings. In addition to the 13 Apostles, the mosaics in the circle also contain images of St. Mary Magdalene; a French saint, St. Madeline Sophie Barat, founder of Les Religieuses du Sacré-Cœur; and two Canadian saints, St. Kateri Tekakwitha and St. Brother André of Montreal. The mosaics in the pendentives, containing biblical manifestations of the four Evangelists, replace the traditional images of a lioness, eagle and ox with the more Canadian wolverine, peregrine falcon and cow, respectively.

All content from Kiddle encyclopedia articles (including the article images and facts) can be freely used under Attribution-ShareAlike license, unless stated otherwise. Cite this article:
Cathedral of the Transfiguration (Markham, Ontario) Facts for Kids. Kiddle Encyclopedia.