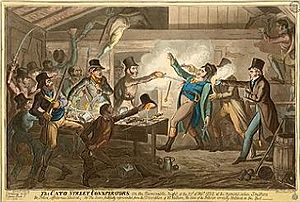 The arrest of the Cato Street conspirators

The Cato Street conspiracy was an attempt to murder all the British cabinet ministers and Prime Minister Lord Liverpool in 1820. Cato Street was their meeting-place, near Edgware Road in London.

The police had an informer. The plotters fell into a police trap. 13 were arrested, and one policeman was killed. Five conspirators were executed, and five others were transported to Australia.

How widespread the Cato Street conspiracy was is uncertain. It was a time of unrest; rumours abounded. Chase notes that, "the London-Irish community and a number of trade societies, notably shoemakers, were prepared to lend support, while unrest and awareness of a planned rising were widespread in the industrial north and on Clydeside".

All content from Kiddle encyclopedia articles (including the article images and facts) can be freely used under Attribution-ShareAlike license, unless stated otherwise. Cite this article:
Cato Street conspiracy Facts for Kids. Kiddle Encyclopedia.