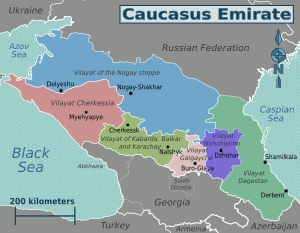 Territory of Jihad against infidels announced by Dokka Umarov

The Caucasus Emirate (Имарат Кавказ Imarat Kavkaz) is not a country and is not recognised by other countries. It is a self-proclaimed virtual state entity. It claims to be the successor to the Chechen Republic of Ichkeria. It was announced on October 31, 2007 by former President of Ichkeria, Dokka Umarov. Its military branch is the Caucasian Front. It has an area of 235,300 square kilometres (90,800 sq mi) and 18,848,917 (2011 est). 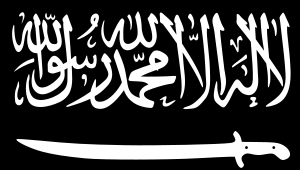 Flag of the Caucasus Emirates

On October 31, 2007, the Islamic nationalists news agency Chechen-press reported that the President of Ichkeria Doka Umarov had proclaimed an Emirate in the Caucasus and declared himself its Emir, thereby abolishing the Chechen Republic of Ichkeria and its presidency.

However, according to Umarov, the bases of the rebel fighters loyal to him "spread from Azerbaijan to Abkhazia".

All content from Kiddle encyclopedia articles (including the article images and facts) can be freely used under Attribution-ShareAlike license, unless stated otherwise. Cite this article:
Caucasus Emirate Facts for Kids. Kiddle Encyclopedia.