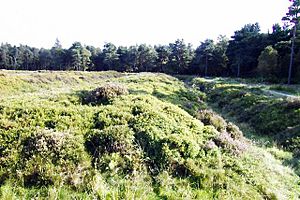 Part of the earthworks

Cawthorne Camp (sometimes spelled "Cawthorn") is a Roman site in north-east England, about 4 miles (6 km) north of Pickering, North Yorkshire. The well-preserved earthworks outline two forts, one with an extension, and a temporary camp built to an unusual plan.

The works date from the late 1st/early 2nd century AD. It has been suggested that they were built for practice rather than for actual military use.

Archaeological investigation has found indications of pre-Roman activity at the site, and also traces of later sunken dwellings (Grubenhäuser). The site was acquired by the North York Moors National Park in 1983.

All content from Kiddle encyclopedia articles (including the article images and facts) can be freely used under Attribution-ShareAlike license, unless stated otherwise. Cite this article:
Cawthorne Camp Facts for Kids. Kiddle Encyclopedia.