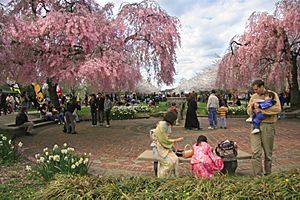 Centennial Arboretum (27 acres) is an arboretum located at the Horticulture Center, Fairmount Park, at the southeast corner of Belmont and Montgomery Drives, Philadelphia, Pennsylvania. It is open daily without charge.

The arboretum contains specimen trees and shrubs from Asia, Europe, and North America. Many were planted in 1876 for the American Centennial Exposition. Nearby is the traditional-style Shofuso Japanese House and Garden brought to Philadelphia in 1957. 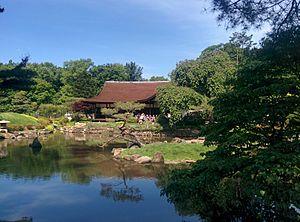 Shofuso Japanese House and Garden at the Centennial Arboretum

All content from Kiddle encyclopedia articles (including the article images and facts) can be freely used under Attribution-ShareAlike license, unless stated otherwise. Cite this article:
Centennial Arboretum Facts for Kids. Kiddle Encyclopedia.