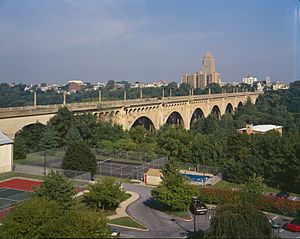 Center City Allentown (with the Albertus L. Meyers Bridge in the foreground), 2007

Center City is the downtown and Central Business District of Allentown, Pennsylvania, in the United States. It has a dense population and is currently undergoing an urban revitalizaton process.

Allentown's Center City is centered at Hamilton Street and Seventh Street, and bounded by Little Lehigh Creek in the east, Martin Luther King Jr. Drive to the south, the city line with Whitehall to the north, and 15th Street to the west. 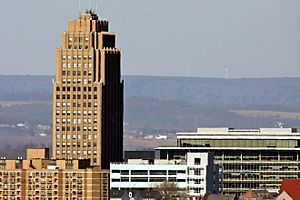 Center City's tallest building is the PPL Building at 322 ft (98 m). The Allentown Art Museum, Allentown Symphony Hall, the former site of Hess's Department Stores' original and flagship store, Baum School of Art, Lehigh County Historical Society and Heritage Museum, and The Liberty Bell Museum are all known landmarks in Center City. A hockey arena was opened in August, 2014 near the PPL building, after emerging from a brief stall after a tax of Allentown workers was repealed, although construction is much slower.

All content from Kiddle encyclopedia articles (including the article images and facts) can be freely used under Attribution-ShareAlike license, unless stated otherwise. Cite this article:
Center City, Allentown, Pennsylvania Facts for Kids. Kiddle Encyclopedia.