Central Park is a former amusement park in the Rittersville section of Allentown, Pennsylvania. It was closed in 1951.

Central Park's origins date to 1868 when J. Frank Reichart laid out a race course north of the Allentown-Bethlehem turnpike (Hanover Avenue) which was opened for trotting and pacing from May to August. In 1872 the Rittersville Park Association was organized. The park was enlarged to 16 acres and was known as Manhattan Park.

When the Allentown & Bethlehem Rapid Traction Company took ownership of the area from Thomas Ritter it was called The Greater Central Park. Included in the park was a menagerie with quite a collection of animals, including elephants. 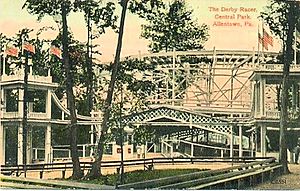 Central Park was what came to be called a "trolley car park." Trolley companies did a brisk business during the work week when people went to work but they struggled to get the public to use them on weekends. It was decided that having an amusement park to lure people out of town would increase weekend use, and as the public traveled they would go past building lots suitable for houses that belonged to a land development company that was a subsidiary to the trolley line.

The park opened on 2 July 1893 as Rittersville Park, offering 40 acres of shady walks and ample park benches. It was built in a wooded area with picnic groves, walking paths, a few amusements, theaters and food stands. The first rides were a carousel, a toboggan chute, and the "Razzle-Dazzle". About 1898 the menagerie closed and the owner of the Manhattan Hotel bought two monkeys from the zoo keeper. Much to his dismay, one of the monkeys set fire to the hotel. It was rebuilt the same year. The new Manhattan Hotel was a place for the latest fashions to be seen by the great crowds that would come from as far away as Mauch Chunk and Philadelphia to the park which had one of the biggest outdoor theaters in Pennsylvania. 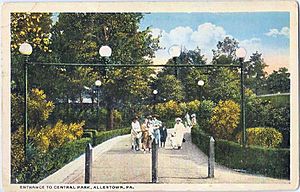 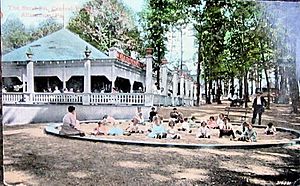 By the turn of the 20th Century, the park grew and grew, reaching its heyday in the period between 1906 and 1920. In 1906, the transit company built a theater that could accommodate 1,600 people and invited major musical entertainers. One of the biggest draws was John Philip Sousa's band. Soon couples were dancing the turkey-trout and bunny hug as older folks wondered what this younger generation was coming to. Plays became the thing and by 1912 the theater was expanded to 2,500 seats. The two most popular plays were George M. Cohan's "Only 45 Minutes From Broadway" and Lew Morton's "The Mayor of Tokio."

Central Park's Racing Coaster, also known as the Derby Racer that it claimed "surpassed any ride of its kind in existence in the eastern United States." The Frolic, the Circle Swing and the "Shoot the Chute," a water ride that concluded with an incline that dropped into a lake, were on the order of what might have been found at New York's Coney Island. In addition, Central Park hosted family reunions and picnics for businesses, clubs and churches. A large sandbox for children provided enjoyment for the young family members while their older siblings played on the swings and enjoyed the rides. Among the events held in the park was the baby parade.

When the Allentown-Kutztown Traction Company completed its trolley line from Allentown to Kutztown in 1899, the company added a stop at Dorney Park, Central Park's competitor in the area. However, Central Park held its own. In 1922 the Manhattan Hotel was torn down and in its place the Manhattan Auditorium was built. An attempt was made in 1933 to establish the first supermarket in this area, but was unsuccessful. It was used for marathon dancing, later for auto shows, home shows, roller skating, to name a few. In 1927 when Dorney added its first thrill ride, a roller coaster. Also, by the late 1920s, automobiles were in widespread use. Unlike Central Park, which was tied to the streetcar, Dorney Park had plenty of space for parking. 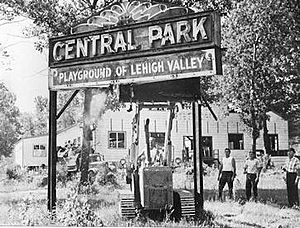 The sign and last of the buildings of Central Park was demolished in the summer of 1964.

The first of a twenty-year string of fires that plagued Central Park began with one on 16 August 1932. A funhouse, the Mystic Castle and the outdoor theater were the primary victims. The next was the fire that destroyed the Cyclone Coaster in 1935. Fires in June, 1940 and April, 1941 destroyed the popular Dodge'em ride and burned the dance hall. And in 1944 the bowling allies and a billiard parlor burned. In 1946, the park was leased by the Transit Company to a private operator. On Christmas Day, 1950 the venerable carousel and the prized Derby Racer were destroyed by a fire. On 2 August 1951 a fire alarm sent Allentown firefighters again to Central Park. This time it was the second outdoor theater, the replacement for the one that had burned in 1932.

With that fire, the park was closed in December 1951 and the land was vacant for just over a decade. In the early 1960s, it was sold for real estate development, and the last of Central Park was razed in 1964. Today a few abandoned concrete footings remain in wooded areas intermixed between clearings and homes and buildings which now exist on the site.

All content from Kiddle encyclopedia articles (including the article images and facts) can be freely used under Attribution-ShareAlike license, unless stated otherwise. Cite this article:
Central Park (Allentown, Pennsylvania) Facts for Kids. Kiddle Encyclopedia.