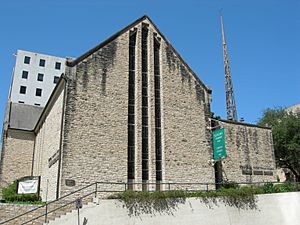 It maintains a program of ministry, outreach, and cultural events. It has presented free concerts weekly since 1980, and since 2006 the church has been a venue for the SXSW Music Festival.

The congregation traces its roots to October 13, 1839, when Austin's first Presbyterian worship service was held at Bullock's hotel. The City of Austin was chartered two and a half months later, December 27, 1839. Present at that service was builder Abner Cook, elder in the first Presbyterian church organized in Austin. He helped acquire the property at the northeast corner of Brazos and Bois d'Arc (now Eighth Street) for the Presbyterian Church (South) following a post-Civil War split in the church. A sanctuary was completed on the site in 1874; the current sanctuary was built in 1957. It was recognized by the Texas Historical Commission in 1989 as an historical site.

All content from Kiddle encyclopedia articles (including the article images and facts) can be freely used under Attribution-ShareAlike license, unless stated otherwise. Cite this article:
Central Presbyterian Church (Austin, Texas) Facts for Kids. Kiddle Encyclopedia.