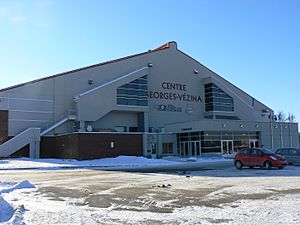 The Centre Georges-Vézina, called the Colisée de Chicoutimi at first, is an arena in Chicoutimi, Quebec, Canada that has space for 4,651 pepple (including 3,683 seats). It where the Chicoutimi Saguenéens ice hockey team play. It is named for Georges Vézina, who played for the Montreal Canadiens as the goaltender and was from Chicoutimi. The arena was built in 1949 and has an ice surface of 200 feet by 100 feet, which is what the Olympics use.

All content from Kiddle encyclopedia articles (including the article images and facts) can be freely used under Attribution-ShareAlike license, unless stated otherwise. Cite this article:
Centre Georges-Vézina Facts for Kids. Kiddle Encyclopedia.