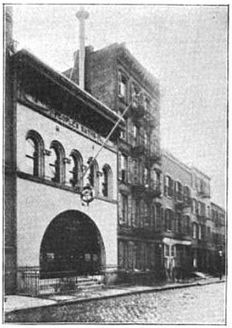 The block also included several gun stores including the John Jovino at 5 Centre Market Place, and the older Frank Lava Gunsmith at 6 Centre Market Place. The gun stores were part of a gun district owing to its proximity to the police headquarters at 240 Centre St. A row of townhouses at No. 1, 2, 4, and 5 were rehabilitated by two developers, a husband-and-wife team, incorporating found architectural castoffs scavenged from around the world as part of its facade.

The street was home to many well-known writers, poets, and artists, including the noted crime photographer Weegee, who lived in a small studio apartment at 5 Centre Market Pl.

All content from Kiddle encyclopedia articles (including the article images and facts) can be freely used under Attribution-ShareAlike license, unless stated otherwise. Cite this article:
Centre Market Place Facts for Kids. Kiddle Encyclopedia.