The Centre for Chinese Contemporary Art is a contemporary art gallery based in Manchester, England, which aims to advance the education of the public in contemporary Chinese arts and culture. It is currently based on Thomas Street in Manchester's Northern Quarter in part of the renovated Smithfield Market Hall

The Chinese View Art Association (CVAA) was established in 1986 by a group of Manchester-based artists of Chinese descent to foster a positive understanding of Chinese identity and culture within the local Chinese community and the general British public and to create a platform for themselves to showcase the diversity of their arts and culture. The artists were frustrated that their work was not being seen in mainstream venues in the city, and was not included in the Black Arts Movement of the time. In the late 1980s and early 1990s the Black Arts Movement highlighted the artistic plight of people of African, Caribbean or South Asian origin yet often excluded artists of Chinese origin.

Built on an ethos of fostering community cohesion between the UK and Chinese community in the early 1980s the CVAA, led by Hong Kong Born artist, Amy Lai registered as a charity in 1986 and held the Chinese View '86 festival, a two-week arts festival which celebrated Chinese art and crafts in its many forms. Up until then, most exhibitions of "Chinese Arts" in Manchester been curated and displayed by British collectors at venues such as Manchester Art Gallery. This was followed by Chinese View '88 Festival which marked Chinese New Year in 1988.

With Financial support from the Manchester City Council and North West Arts Board, the CVAA opened the Chinese Art Centre on Charlotte Street in Manchester's Chinatown which was officially opened by Diana, Princess of Wales in 1990 providing the only dedicated platform for British Chinese artists to show and develop their work. The centre was also involved in establishing a hub for arts and cultural activities for Manchester's local Chinese communities and its programme included traditional Chinese arts and crafts such as calligraphy, brush paintings, and Chinese opera. In 1992 the Centre held its first large scale contemporary art exhibition, Beyond the Chinese Takeaway, which reflected on the experience of second and third generation British Chinese artists.

‘Beyond Chinese Take Away’ designated itself as ‘the first exhibition of its kind researching the innovative works of contemporary artists of Chinese origin living in Britain.’ The exhibition confronted stereotypes of the Chinese in Britain, and reflected the contested relationship between first and second generation Chinese migrants, and the Chinese food businesses which was a major part of many of their experiences.

In 1996, the Chinese Arts Centre’s involvement in part hosting The British Art Show 4 was a pivotal point in the organisations history, which established the centre on a national platform.

Establishing an International Reputation, and Relocation out of Chinatown to Edge Street (1997–2003)

By the mid-1990s, the ethos of the Chinese Art Centre was reviewed after its funding from the North West Arts Board was almost halved. in June 1996 Sarah Champion was appointed the organisation's Arts Development Officer to develop the Centres new strategy with five priority areas: education, artist development, the Chinese Community, arts promotion, and advocacy. Champion, appointed Director of the Centre in November 1997, oversaw the centre's move to new premises at Edge Street in Manchester's Northern Quarter in January 1997 and the centre's transition to a contemporary arts venue.

This was an important time in the development of the centre; the Hong Kong handover saw much focus on Chinese culture in the British media. This dramatic increase in mainstream recognition of all things Chinese encouraged the centre to change direction and, rather than just exhibiting work, proactively support the careers of artists of Chinese descent. In addition, 1997 marked the year that the organisation extended its remit to become a national charity and started to work internationally, rather than just with British Chinese artists. In 1999 Centre for Chinese Contemporary Art produced Representing the People – its first major touring exhibition. Touring to four key national venues and seen by 250,000 people, Representing the People was the first independent exhibition to show artists from Mainland China in the UK. 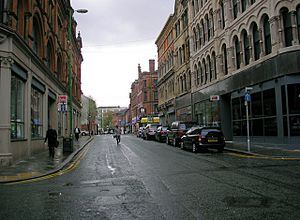 Chinese Art Centre on the left in 2008

In 2006–2007, in association with the Live Art Development Agency, the Centre held the VITAL Festivals. The Festivals presented Live Art performances, film screenings, and artists' talks, presentations and a conference associated with performance artists from China and of Chinese descent.

In 2010, Centre for Chinese Contemporary Art organised a Liberation Exhibition – an exhibition growing out of an ongoing discussion with Carol Yinghua Lu and Liu Ding following the blocked use of a selection of social networking and self-publishing websites such as Twitter, Facebook, and YouTube in China. This exhibition takes the form of a visual art exhibition as well as a series of events, a debate, and a blog discussion among the curators of the exhibition and invited guests. Speakers at the Centre for Chinese Contemporary Art discussed a range of perspectives on the online media and the power of social networking sites. Guest speakers include exhibiting artist Brendan Fan, FaceRook artist Candy Chen Shuhui, Laurence Kaye from Pirate Party UK, Matthew Trump from the Northern Cybercrime Forensics Group, and Tom Kinniburgh, Associate Producer of the Application Company Chillingo Limited. It proposes a close look into the openness and potential of the Internet world as well as its susceptibility to power and political manipulation and ideological controls. The event is sponsored kindly by City Inn Manchester, and supported by Arts Council England and AGMA, Association of Greater Manchester Authorities.

In October 2013 the Chinese Arts Centre became the Centre for Chinese Contemporary Art (CFCCA), cementing the organisation position as:

Since 2013, the centre has worked in partnership with the University of Salford to build a collection of Chinese contemporary art works. The collection is held by the Salford Museum and Art Gallery.

Following a project funded by the Heritage Lottery Fund, the Centre opened its library and archive to the public in 2018. The library contains publications collected by the Centre relating to Chinese contemporary art, including exhibition catalogues, artist monographs, and festival publications. The archive collections contains the record of the centre and its predecessors, covering the development of the centre and its programme history.

Selected Artists who have exhibited at the Centre

All content from Kiddle encyclopedia articles (including the article images and facts) can be freely used under Attribution-ShareAlike license, unless stated otherwise. Cite this article:
Centre for Chinese Contemporary Art Facts for Kids. Kiddle Encyclopedia.