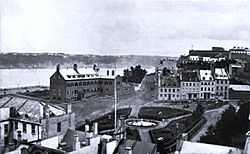 Château Haldimand and the Place d'Armes, 1866 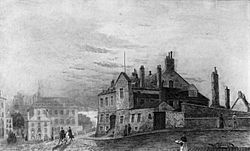 The Château Haldimand was a castle that stood where the Château Frontenac now stands in Quebec City, Quebec, Canada. The building was constructed between 1784 and 1786.

In 1784 the then governor of Quebec, Frederick Haldimand, ordered construction of the château. It became the seat of the colonial government of the province of Quebec from 1786 to 1791.

In 1860, the Canadian government established administrative offices and the headquarters of the Legislative Assembly of Canada in this castle until 1866.

The castle was later used as part of Laval University until 1892, when it was demolished to make way for the construction of the Château Frontenac.

All content from Kiddle encyclopedia articles (including the article images and facts) can be freely used under Attribution-ShareAlike license, unless stated otherwise. Cite this article:
Château Haldimand Facts for Kids. Kiddle Encyclopedia.