Charles Didier Dreux (May 11, 1832 – July 5, 1861) was the first Confederate field officer killed during the Civil War. He was the son of Guy Dreux and Léontine Arnoult. Prior to the Civil War, Dreux had served as district attorney. He was also a member of the Louisiana state legislature. 30,000 mourners attended his funeral in New Orleans. He is buried in Metairie Cemetery. 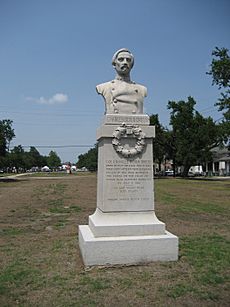 According to Grace King, those who knew him described him "as a man of great personal magnetism; brilliant, eloquent, dashing." He left for the battlefield as Lieutenant Colonel of the Louisiana Guard Battalion, in command of Dreux's (1st) Battalion, composed of the first five companies that volunteered from Louisiana. Three months later, he died at Young's Mill (Warwick, Virginia, now Newport News, Virginia) while on a failed mission to capture Union officers who often ate breakfast at Smith's Farm. His last words were "Steady, boys! Steady!”

A monument to him is located in New Orleans at the intersection of Canal Street and South Jefferson Davis Parkway. The text on the monument reads:

Col. Charles Didier Dreux
Born in New Orleans May 11, 1832
First Con. Officer from Louisiana
killed in the War between
the States on the field of
honor near Newport News Va.
on July 5, 1861
His last words were
"Boys steady"
Nobler braver never lived

An Elegy on the Death of Lt. Col. Chas. Dreux, words by James R. Randall and music by G. M. Loening, was published in New Orleans in 1861.

All content from Kiddle encyclopedia articles (including the article images and facts) can be freely used under Attribution-ShareAlike license, unless stated otherwise. Cite this article:
Charles Didier Dreux Facts for Kids. Kiddle Encyclopedia.