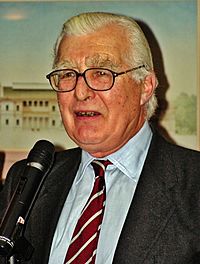 General Sir Charles Richard Huxtable, KCB, CBE (22 July 1931 – 26 November 2018) was a senior British Army officer. He fought in the Korean War. He was Commander-in-Chief, Land Forces between 1988 and 1990. In the 1961 Queen's Birthday Honours, he was appointed Member of the Order of the British Empire (MBE).

All content from Kiddle encyclopedia articles (including the article images and facts) can be freely used under Attribution-ShareAlike license, unless stated otherwise. Cite this article:
Charles Huxtable Facts for Kids. Kiddle Encyclopedia.