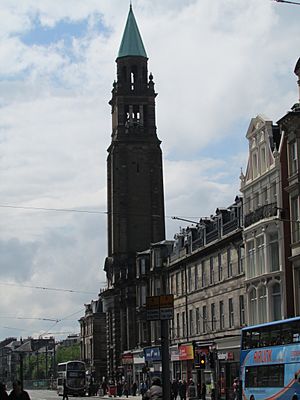 The Charlotte Chapel, also known by its previous name, St George's West Church, is a historic church building located in Shandwick Place, Edinburgh, Scotland. It belongs to an Independent Baptist congregation, and was originally a parish church of the Church of Scotland.

The congregation was established in January 1808, when Christopher Anderson, a young Edinburgh businessman, began evangelical work in the Pleasance area of the city. By 1816 his Pleasance church was too small and he bought Charlotte Chapel, recently vacated by a Qualified congregation which had joined the Scottish Episcopal Church and then moved to St John's Church, on Princes Street. This original two-storeyed building seated 750. Anderson was pastor until 1851 and membership peaked at 232 in 1873, although many more attended services. Membership began to fall due mainly to emigration, and by 1901 the church had no minister and only a small congregation. Joseph Kemp, of Hawick, who was appointed pastor, began a revival, holding open-air meetings in Princes Street. Membership rose once more and in 1907 plans for a new building were prepared. The Rose Street church building was built at a cost of £7,250 and opened in 1912 with seating for exactly 1000.

In 2008 during the latter part of pastor Peter Grainger's tenure, the church held its 200th anniversary celebrations over the course of an extended weekend in October which included a large cèilidh at an area school, a formal luncheon at the Assembly Rooms on George Street, and a concert by modern hymn writers Kristen and Keith Getty.

Also for the bicentennial the church saw many former members return and guest ministers visit including James Moser, Derek Prime, and American-based radio pastor Alistair Begg. Begg, a native of Scotland, was formerly "Pastor's Assistant" to Derek Prime at Charlotte Chapel beginning in September 1975 and returned to lead the 2008 celebrations, preaching at both the Sunday morning and evening services at the church's former Rose Street location. In addition, a scholarly book exploring the church's history and concluding with the 200th anniversary was later written by "honorary elder and former secretary" Dr. Ian L.S. Balfour entitled "Revival in Rose Street: A history of Charlotte Baptist Chapel, Edinburgh."

There are three services every Sunday: two in the morning at 9am and 11am and an evening service at 7:00pm. 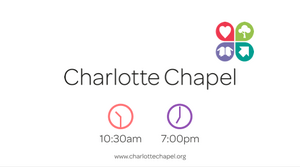 All content from Kiddle encyclopedia articles (including the article images and facts) can be freely used under Attribution-ShareAlike license, unless stated otherwise. Cite this article:
Charlotte Chapel (Edinburgh) Facts for Kids. Kiddle Encyclopedia.