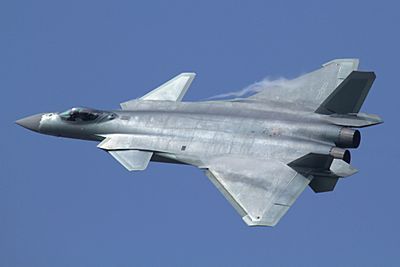 The Chengdu J-20 is an airplane China uses that was designed to fight other airplanes. It has stealth, which means it is very hard for radar to see it. It also has 2 engines, one seat, and can fly good in all weather. It started being used by China in March 2017. It has canards, which are tiny wings in front of the main set of bigger wings that help it stay in the air. It is the world's third working stealth fighter. The first is the F-22 and the second is the F-35. It can fly 1.7 times faster than sound.

The Pentagon said that their files on the F-35 were hacked by someone from China. Some people think that this hack helped the Chinese build the J-20 faster.

All content from Kiddle encyclopedia articles (including the article images and facts) can be freely used under Attribution-ShareAlike license, unless stated otherwise. Cite this article:
Chengdu J-20 Facts for Kids. Kiddle Encyclopedia.