The Heritage Center is operated by the Oklahoma Historical Society. 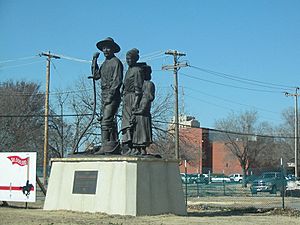 Permanent exhibits tell the story of early settlement of the region after the Land Run of 1893, the development of agriculture, the discovery of oil, and the early rail industry in the region. Additional exhibits focus on Phillips University and Enid, Oklahoma history.

The Heritage Center has a temporary exhibit gallery that houses traveling exhibitions. At a gala on September 16, 2010, the museums featuring David Fitzgerald's "Cherokee Nation: Portrait of a People" photography exhibit. It was the museum's first exhibit in its temporary exhibit hall, which predated the opening of the rest of the permanent exhibits.

The Heritage Center houses a research center with an archival collection that includes photographs, oral histories, newspapers, genealogical information, and a reference library. A full-time archivist is on staff to help visitors with research requests. 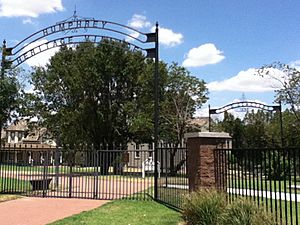 The entrance to the Humphrey Heritage Village.

The Humphrey Heritage Village is a living history village on the grounds of the Cherokee Strip Regional Heritage Center. The village includes historic buildings from northwestern Oklahoma, such as Enid's U.S. Land Office from the Land Run of 1893. Other buildings include the Glidewell house, Enid's first Episcopal church, and the Turkey Creek School House.

All content from Kiddle encyclopedia articles (including the article images and facts) can be freely used under Attribution-ShareAlike license, unless stated otherwise. Cite this article:
Cherokee Strip Regional Heritage Center Facts for Kids. Kiddle Encyclopedia.