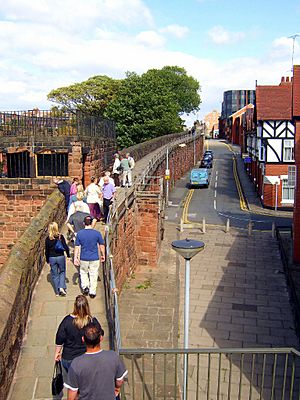 The view from St Martin's Gate, on the northernmost part of the walls.

The Chester city walls are big intact defensive walls around an important English city of Chester. The city has been defended with walls since the foundation of the Deva Victrix fort on the site in 79.

The first walls were built to help the Roman fort in 79, although these were replaced by stronger stone walls between the 1st and 3rd century. The walls enclosed a far smaller area than the modern walls, with the south-western corner much farther from the River Dee.

All content from Kiddle encyclopedia articles (including the article images and facts) can be freely used under Attribution-ShareAlike license, unless stated otherwise. Cite this article:
Chester city walls Facts for Kids. Kiddle Encyclopedia.