The 1869 pumping station, located across Michigan Avenue from the Water Tower.

The Chicago Avenue Pumping Station is a historic district contributing property in the Old Chicago Water Tower District landmark district. It is located on Michigan Avenue along the Magnificent Mile shopping district in the Near North Side community area of Chicago, Illinois. It is on the east side of Michigan Avenue opposite the Chicago Water Tower.

The pumping station was built in 1869 by architect William W. Boyington. In 1918, when Pine Street was widened, the plans were altered in order to give the Chicago Water Tower and Pumping Station a featured location. 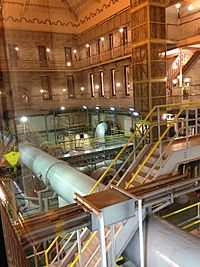 Inside the pumping station

In 2003 and 2004 the building was awarded several honors for adaptive reuse based on renovations which accommodated the Lookingglass Theatre Company. In fact, early in this decade four different redevelopment projects were occurring simultaneously at this landmark. The other projects included roof deck replacement, façade restoration, exterior architectural lighting improvements, landscaping improvements and lead paint abatement. The following are the awards won for redevelopment and renovation:

All content from Kiddle encyclopedia articles (including the article images and facts) can be freely used under Attribution-ShareAlike license, unless stated otherwise. Cite this article:
Chicago Avenue Pumping Station Facts for Kids. Kiddle Encyclopedia.