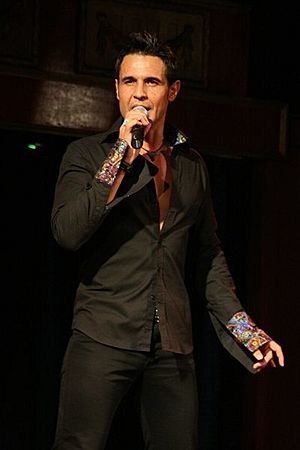 Chico Slimani (born 2 April 1971) is a Moroccan-Welsh pop singer based in the UK and Morocco. He has been active since 2005 when he reached the quarter-finals of the 2005 UK series of talent show The X Factor. He has had 3 hit singles as of 2010, Number 1 hit "It's Chico Time", which was number 3 in Ireland, Number 24 hit "Disco" which was number 39 in Ireland and Number 45 hit "Curvy Cola Bottle Body" which failed to chart in Ireland he charted at number 85 with "It's England Time". He is part of Sony BMG record label. His album is Lights, Camera, Action. He is a contestant in the seventh series of Dancing on Ice, which began in January 2012. He is also known as Chico.

All content from Kiddle encyclopedia articles (including the article images and facts) can be freely used under Attribution-ShareAlike license, unless stated otherwise. Cite this article:
Chico Slimani Facts for Kids. Kiddle Encyclopedia.