Chico is a passenger station in the South Campus Neighborhood of Chico, California served by Amtrak. It is located at West Fifth and Orange streets and is used by Amtrak's Coast Starlight service. The station was built by the Southern Pacific Railroad in 1892.

The terminal is partially wheelchair accessible, has an enclosed waiting area, public restrooms, public pay phones, free short-term and long-term parking. Trains run between Seattle, Washington and Los Angeles with a northbound and a southbound train departing from the station daily. The Greyhound bus station is also located at Fifth and Orange Streets. 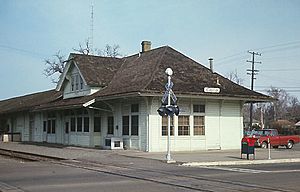 The station was built by the Southern Pacific Railroad in 1892, replacing an older structure built in 1870.

The station was shown in the 1947 film Magic Town when James Stewart's character arrives in the fictional town of Grandview. During his 1952 Vice Presidential campaign, Richard Nixon was talking on the pay phone at the station when he got the news from the campaign headquarters that he would have to respond to the Checkers issue with the 'Checkers speech'.

Passenger rail service to Chico ceased in 1957, but was reactivated when Amtrak rerouted the Coast Starlight to its current alignment in 1982. The city and the Chamber of Commerce saved the current structure from demolition through an agreement with the Southern Pacific Railroad in 1987. That same year, the depot was listed in the National Register of Historic Places as the Southern Pacific Depot. The building is also home to the Chico Art Center.

While the Butte County Association of Governments has looked in to establishment of weekday bus service from Chico to Sacramento, their plan called for the bus to depart not from the station but rather a park and ride facility on Fir Street. A different North State Intercity Bus route received TIRCP funding in 2018 and will provide weekday feeder service to Sacramento from the Chico station.

All content from Kiddle encyclopedia articles (including the article images and facts) can be freely used under Attribution-ShareAlike license, unless stated otherwise. Cite this article:
Chico station Facts for Kids. Kiddle Encyclopedia.