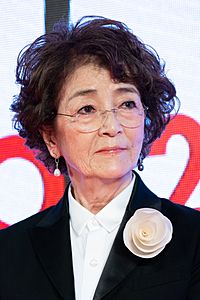 She sang many pupular songs, mostly in her younger days. She is also known for her roles as Sakura in the Otoko wa Tsurai yo series from 1969 until 1995. She acted in many movies directed by Yōji Yamada. She won the award for best actress at the 5th Hochi Film Award for A Distant Cry from Spring.

Her hit song were as follows.

All content from Kiddle encyclopedia articles (including the article images and facts) can be freely used under Attribution-ShareAlike license, unless stated otherwise. Cite this article:
Chieko Baisho Facts for Kids. Kiddle Encyclopedia.