The Children's Film Unit was a unique British film production unit which offered children from the ages of 10 to 16 the opportunity to learn about all aspects of filmmaking, and to participate as part of the crew in the making of professional-quality feature films. The children were directly involved from the initial concept of a film right through to the completed product.

CFU films had a theatrical release, as well as being shown on British and overseas television, and were exhibited (and sometimes winners) at international film festivals. 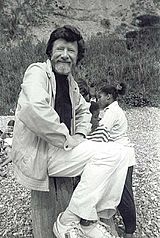 Colin Finbow on location for "Doombeach" (1989) Photograph by Kit Ellis

The Children's Film Unit was formed in 1981 by schoolteacher and ex-Avengers writer, Colin Finbow. It had begun life as the film studies department at Forest Hill School in South East London. The standard of the work Finbow and his students produced so excited professional film makers due to its quality and freshness that, after one of their films, "The Custard Boys" (1979) received critical acclaim, it was suggested that more children should benefit from this unique experience.

The CFU operated outside of normal school hours, when during regular weekend and holiday workshops the children were trained to a high level of competence in all aspects of filmmaking, including camera-work, lighting, sound, acting, writing, and costume. Although some of the CFU's children did perform in their films, they only played the roles of children. All adult characters were performed by professional adult actors.

Generally the CFU produced one feature-length film per year, with the bulk of the production schedule occurring during the summer holidays. After principal photography was completed, pick-ups would be shot during weekends. Although all the films were then edited by director Colin Finbow, the children were given the opportunity to participate in the post-production process, within the limits of the post-production facilities and their own school schedules. Between features, the children's training consisted of making short films, and attending regular lectures and demonstrations from industry experts, such as Bryan Forbes, Lord Attenborough, Lord Puttnam and others.

The CFU's tiny premises at Studio 4, Berrytime Studios, Queenstown Road, Battersea, was organised with the children learning acting skills working upstairs in the area used for administration, tea-making, and toilets, while those studying the technical aspects of film-making worked downstairs in two small rooms filled with old props and a plethora of donated equipment, which included a Moviola, a Steenbeck, two Arriflex 16SR cameras, one Arriflex 16BL camera, a 16mm Bolex camera, a Nagra III, and assorted lights, legs, lenses, microphones, and booms. Grip equipment (dollys, cranes etc.) was usually hired-in as needed, along with much other additional hardware. But despite the cramped conditions, the children of the CFU still found space to build interior sets when required. The CFU later moved to Warner Bros. Studios, Leavesden, in Hertfordshire.

The CFU frequently employed the services of friends in the film and television industry, both in the creative fields, and also the areas of equipment hire, post-production facilities, and distribution/publicity, who regularly donated their time or equipment. One regular collaborator was composer, Dave Hewson, who composed the original music for most of the CFU's films. Ray and Tom Harris from special effects company Any Effects created the on-set effects for many of the films, and were among the industry professionals who gave lectures and demonstrations during weekend workshops.

During production of How's Business (1991), the CFU crew were followed by a BBC documentary crew for an episode of the popular children's series The Lowdown. This episode covered the filming of How's Business and featured several members of the CFU in interviews and voice-over. The documentary concluded with scenes of the Royal Premiere at Leicester Square, and merged its own credits with the credits from How's Business. This episode was first broadcast on BBC1 at 17:10 on 5 May 1992.

Under The Bed at the Odeon Leicester Square, on Saturday 17 September 1988

Willie's War at The Prince Charles Cinema, WC2, on Thursday 4 May 1995

The Gingerbread House at BAFTA, Piccadilly, on Monday 3 March 1997

Almost all of their films have been shown on Channel 4, had a theatrical release, and been distributed in territories around the world. Channel 4 financed and televised most of the CFU's output, and Watchmaker Films handled worldwide distribution. However, How's Business was produced in collaboration with the Children's Film and Television Foundation (with which the CFU often was confused in popular media) and was never shown on TV in the UK, while the last three films in the filmography listed below were only ever shown in the small hours of the morning, as Channel 4 shifted its focus in the later 1990s.

A Swarm in May – Moscow

Under The Bed – Chicago

The CFU continued to operate for the first decade of the new millennium, but lack of funding prevented them from making any further feature films. On 9 August 2011 the Children's Film Unit was removed from the register of UK charities.

All content from Kiddle encyclopedia articles (including the article images and facts) can be freely used under Attribution-ShareAlike license, unless stated otherwise. Cite this article:
Children's Film Unit Facts for Kids. Kiddle Encyclopedia.