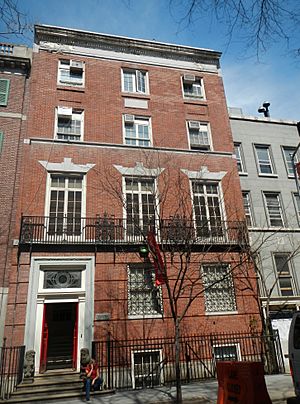 Looking northeast at the institute's building on a sunny day.

The China Institute in America (Chinese: 華美協進社; pinyin: Huáměi Xiéjìnshè; literally "Sino-American Cooperation Advancement Society") is a nonprofit educational and cultural institution in New York City that was founded in 1926.

China Institute in America, newly located at 100 Washington Street, New York City, with a satellite school on the upper east side of Manhattan, advances a deeper understanding of China through programs in education, culture, business, and art in the belief that cross-cultural understanding strengthens the global community. It is the oldest bi-cultural, non-profit organization in the United States to focus exclusively on China.

The institute offers programs, activities, courses and seminars on the visual and performing arts, culture, history, music, philosophy, language and literature. They are appropriate for people of all ages and backgrounds, as well as children's programming, business and current affairs programs and professional development programs for teachers.

China Institute was founded in 1926 by a group of distinguished American and Chinese educators including John Dewey, Hu Shih, Paul Monroe and Dr. Kuo Ping-wen. It is the oldest bicultural organization in America devoted exclusively to China.

Chinese students—seen as a leadership class that eventually shaped the future of modern China—were not only welcomed in the United States, but funded and protected by powerful American and Chinese interests. Such preferences for elite, educated Chinese, as opposed to the open discrimination against laborers and petty entrepreneurs of ghettoized Chinatown formations, laid the foundations for post-1965 immigration selection processes that have produced Chinese as model minority subjects in the late twentieth century.

In 1944, the institute was chartered by the New York State Board of Regents, and defined as a continuing education organization whose purpose was:

To promote education and culture in art, literature, science, history, and other subjects among Chinese and Americans, and to cultivate a mutual understanding between China and the United States and the citizens thereof, by the administration of funds entrusted to the corporation for use in the establishment of scholarships and for other expenses of students studying in the United States ... and for the exchange of information and views between Chinese and Americans.

The School of Chinese Studies was founded in 1933 and offers classes, courses and programs in Chinese language, history, literature, arts and culture, etc.

The School was chartered in 1944 by the Board of Regents of the New York State Department of Education. With a direct endorsement by New York City Mayor Fiorello La Guardia, Superintendent of Schools Dr. John E. Wade granted the school accreditation to offer in-service credit courses for teachers, and China Institute was soon recognized as the nation's first and largest school of Chinese studies of its kind.

For over 80 years, China Institute's School of Chinese Studies has taught thousands of students, both children and adults, to speak, read and write Chinese and has provided courses and workshops to the general public on Chinese culture, history, art, literature and language teaching; brought hundreds of students and educators to China for tours and study programs; and created curriculum guides and books about China. In addition to Mandarin, The institute offers instruction in traditional Chinese activities, such as calligraphy and taijiquan, as well as lectures, symposia, workshops, and short courses designed to contextualize traditional and contemporary Chinese art and culture. For K-12 students, Discover China Through Art (DCTA) is China Institute's arts exposure program, designed to introduce students to Chinese art and culture through participatory lectures and workshops based on the current Gallery exhibition.

China Institute provides resources to K-12 educators interested in promoting the integration of Chinese history, culture, and language into their curriculum through workshops, study tours, and curriculum guides. In a partnership with East China Normal University (ECNU) in Shanghai, the institute offers a Joint Masters Program for training K-12 Chinese Language teachers. Educators who complete the program are eligible to become certified in New York State and thirty-five other states to teach in American public schools. The School also provides ongoing professional development courses and workshops for K-12 educators. These programs are delivered both at China Institute and at outside educational institutions, including schools, universities, libraries and museums.

Established in 1966, China Institute Gallery was the first non-profit gallery in the United States to showcase Chinese art and culture exclusively and on a regular basis. It features thematic exhibitions, which are accompanied by in-depth scholarly catalogues. The Gallery has presented over 100 exhibitions in such areas as calligraphy, painting, ceramics, bronzes, decorative art, folk art, architecture, photography, textiles, and contemporary art covering 5,000 years of Chinese history from the Neolithic period to present day. e.

The Gallery offers: · Two Major Exhibitions Per Year · Traveling Exhibitions · Exhibition Catalogs · Gallery Tours through Discover China Through Art (DCTA), an educational program for all age groups · Membership Opportunities – Friends of the Gallery for those who share a special love for the art of China

A number of notable exhibitions of classic, modern and contemporary Chinese art, include: Along the Yangzi River: Regional Culture of the Bronze Age from Hunan; Blooming in the Shadows: Unofficial Chinese Art 1974-1985; Confucius: His life and Legacy in Art; The Last Emperor's Collection: Masterpieces of Painting and Calligraphy from the Liaoning Provincial Museum; Buddhist Sculpture from China: Selections from the Xi'an Beilin Museum, Fifth through Ninth Centuries; Shu: reinventing Books in Contemporary Chinese Art.

The China Institute Center for Business is a venue for U.S.-China business interaction in the United States. A diverse range of industries and topics are addressed, and woven throughout is programming on cross-border investing and the latest technology trends.

All content from Kiddle encyclopedia articles (including the article images and facts) can be freely used under Attribution-ShareAlike license, unless stated otherwise. Cite this article:
China Institute Facts for Kids. Kiddle Encyclopedia.