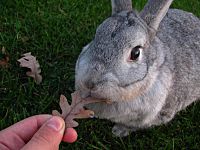 A Chinchilla Rabbit eating a leaf during the fall.

Chinchilla rabbits are a group of three rabbit breeds that have been bred for a coat that resembles that of chinchillas. Despite their name, they are not related to and cannot interbreed with chinchillas, which are a species of rodent. Rabbits are lagomorphs. A mutation diluted the yellow pigment in the hairs to almost white, changing in this way the color of the fur of the wild rabbit (agouti) into chinchilla.

There are three breeds of Chinchilla rabbit recognized by the ARBA ,"American Rabbit Breeders Association".

Standard Chinchilla is the original chinchilla version with the larger versions being developed from it. It has a compact body and rollback fur.

The American Chinchilla or "Heavyweight Chinchilla" is larger than the Standard Chinchilla, it has a commercial body type but the same roll back coat. Standard Chinchillas bred for large size produced this breed. Chinchilla Rabbits originated in France and were bred to standard by M. J. Dybowski. They were introduced to the United States in 1919.

American Chinchilla Rabbits are good breeders, with an average litter of 6-9 kits. 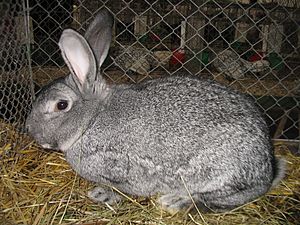 The Giant Chinchilla is a result of crosses between Chinchilla and Flemish Giant breeds; it originates in the United States. This breed is used primarily as a commercial meat rabbit.

All content from Kiddle encyclopedia articles (including the article images and facts) can be freely used under Attribution-ShareAlike license, unless stated otherwise. Cite this article:
Chinchilla rabbit Facts for Kids. Kiddle Encyclopedia.