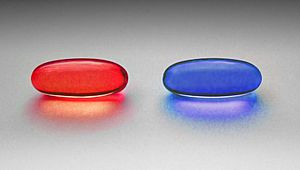 In the film The Matrix, Neo is offered the option of consuming either the red pill or the blue pill. Picking the red pill would result in the truth of Neo's world being revealed to him, while picking the blue pill would allow him to continue in ignorance. Thus, Neo must judge the merits of the possible outcomes of his choice.

A choice is a decision between alternatives. It can include judging the merits of multiple options and selecting one or more of them. One can make a choice between imagined options ("What would I do if...?") or between real options followed by the corresponding action. For example, a traveller might choose a route for a journey based on the preference of arriving at a given destination as soon as possible. The preferred (and therefore chosen) route can then follow from information such as the length of each of the possible routes, traffic conditions, etc. The arrival at a choice can include more complex motivators such as cognition, instinct, and feeling.

Simple choices might include what to eat for dinner or what to wear on a Saturday morning–choices that have relatively low-impact on the chooser's life overall. More complex choices might involve (for example) what candidate to vote for in an election, what profession to pursue, a life partner, etc.–choices based on multiple influences and having larger ramifications.

Another way of looking at decisions focuses on the thought mechanism used, is the decision:

All content from Kiddle encyclopedia articles (including the article images and facts) can be freely used under Attribution-ShareAlike license, unless stated otherwise. Cite this article:
Choice Facts for Kids. Kiddle Encyclopedia.