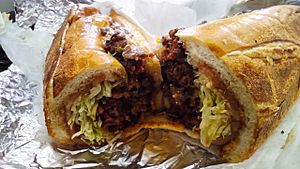 Chopped cheese, also known as "a chop cheese", is a type of sandwich originating from New York City. Found in bodegas throughout the Bronx, Harlem, Brooklyn, and Queens, it is made on a grill with ground beef, onions, and topped by melted cheese and served with lettuce, tomatoes, and condiments on a hero roll. It is compared with the cheesesteak, and a cheese sloppy joe, often thought of as a mixture of both, and is said to represent the culture of New York.

Though the chopped cheese sandwich has recently gained a lot of media attention, the actual origins of the sandwich are up for debate. There is speculation that the sandwich was influenced by an Arabic specialty, dagha yamneeya (دقة يمنية), which is essentially cooked chopped meat and vegetables served with Yemeni bread. Some have argued that it is a century old recipe that has been "Columbused", while some think it is a more recent creation.

All content from Kiddle encyclopedia articles (including the article images and facts) can be freely used under Attribution-ShareAlike license, unless stated otherwise. Cite this article:
Chopped cheese Facts for Kids. Kiddle Encyclopedia.