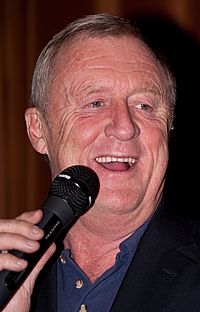 Christopher John "Chris" Tarrant (born 10 October 1946) is a British radio and television personality. He is best known as the presenter of the British version of Who Wants to Be a Millionaire?. He presented the show from 1998 to 2014. He was born on 10 October 1946 in Reading, Berkshire, England.

All content from Kiddle encyclopedia articles (including the article images and facts) can be freely used under Attribution-ShareAlike license, unless stated otherwise. Cite this article:
Chris Tarrant Facts for Kids. Kiddle Encyclopedia.