Christ Church is a church situated in Hackenthorpe, a suburb of the City of Sheffield. It is located on Sheffield road, and was built in 1899. The church was largely funded by local land owner James Houndsfield. 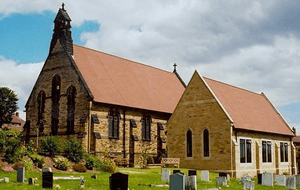 Before 1900, the residents of Hackenthorpe attended the parish church in Beighton, Church of St Mary the Virgin. Methodists in the village also had a purpose built chapel which stood on Main Street for a number of years, however this was soon demolished. There was also a purpose built mission room which stood on Church Lane. This building was later turned into a co-operative grocery store and finally a button factory ran by Charles Singleton Ltd.

In 1899 the village got its own church. The Earl Manvers donated £500 and promised the acre of land which the church now stands on Sheffield Road. James Hounsfield, local resident at Hackenthorpe Hall also gave £250. In total £1,320 was raised and the church was constructed.

A chapel arch was originally planned, however this needed to be rebuilt and strengthened and due to lack of funds, this was never replaced. This shortage of money was in spite of £250 promised from James Houndsfield if the chapel was built in his lifetime and also a further £25 offer from John Jubb from Drakehouse under the same conditions. Before the arch the total cost of the church stood at £2,550 and a century later, the arch is still bricked up.

A memorial stands outside the church featuring the names of Hackenthorpe residents that lost their lives in World War I and World War II.

Prior to 1973 the post was attached to the Beighton parish

All content from Kiddle encyclopedia articles (including the article images and facts) can be freely used under Attribution-ShareAlike license, unless stated otherwise. Cite this article:
Christ Church, Hackenthorpe Facts for Kids. Kiddle Encyclopedia.