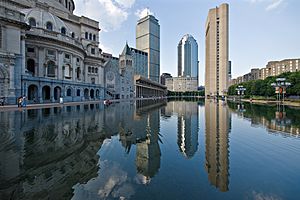 The site houses the religion's administrative center and its Mother Church, The First Church of Christ, Scientist.

The center is split into five parcels of land, which were owned directly or beneficially by the board of directors of the Church of Christ, Scientist, as of 2011[update]. According to the City of Boston Landmarks Commission, the land consists of:

All content from Kiddle encyclopedia articles (including the article images and facts) can be freely used under Attribution-ShareAlike license, unless stated otherwise. Cite this article:
Christian Science Center Facts for Kids. Kiddle Encyclopedia.