Christine Johnston (born 4 January 1950) is a novelist from New Zealand.

Johnston was born 4 January 1950 in Dunedin, New Zealand. She was educated at St Dominic's College and the University of Otago. 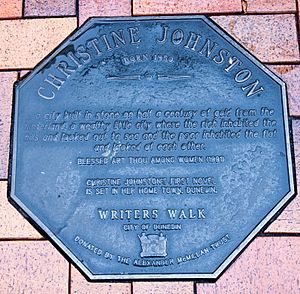 Johnston writes fiction for adults and young adults, both novels and short stories. Her fiction has been broadcast on national radio and appeared in journals, including Landfall, Metro, and Sport. Her writing is often set in the suburbs and towns of New Zealand and deals with everyday aspects of life and interactions, including the Themes also included childhood, adolescence and adulthood.

Her reflections on Catholisim are included in the book, The Source of the Song.

Her novel, Blessed Art Though Among Women, won the Heinemann Reed Fiction Award in 1990. In 1994 she was awarded the Robert Burns Fellowship, a literary residency at the University of Otago in Dunedin, New Zealand. She was the winner of the Unity Books Very Short Story Collection in 2003.

All content from Kiddle encyclopedia articles (including the article images and facts) can be freely used under Attribution-ShareAlike license, unless stated otherwise. Cite this article:
Christine Johnston (writer) Facts for Kids. Kiddle Encyclopedia.